A Trail of Tears

Last night, I enjoyed some of the most intense fighting I’d experienced in a long time.   The soldiers of the Amarr Militia had seized back Auga, a key low sec trade hub in the Hed constellation, and the system that stands between my alliance and the rest of Matari space.  With Auga fallen, the Amarr were on my doorstep.   By the time I had arrived home from work and logged into the game, they had begun to siege my home system of Kourmonen.   I hopped into a Hurricane, punched the undock button, and warped off to join the fleet.  Any other night, this fight would have seemed routine.   Inferno, however, changes the stakes for all of us.  Failure to hold Kourmonen until May 22 means I will be uprooted from my home, exiled from the comfort of docking and the ability to repair and reship, and forced to convoy over half the ships in my personal fleet to a new safe haven.   This fight mattered more than any other before it.

The next several hours were intense – two fleets, the Amarrian invaders and the Matari defenders, brawled across the entire Kourmonen system, fighting in each new complex that spawned as the Amarr pressed to capture victory points and tip the system in their favor.  We fought in battlecruisers in the major compounds, and shipped down into cruisers for standard complexes and frigates and destroyer gangs for the minor outposts.   We had a large fleet, so did our enemy, but the time it takes to reship and fact that many pilots had their hangars elsewhere meant that we rarely fought with the entire fleet in one location.  Cruisers would camp entrances to minor outposts, unable to enter due to ship restrictions, frigates would rush to start the countdowns on major compounds until the heavy muscle could arrive to chase off the enemy that would soon follow, and ship after ship after ship was reduced to smoldering wreckage.  This is the type of action we all enlisted in Faction Warfare to enjoy.

The system of tiered complexes, victory points, and control bunkers that form our “terrain” and allow pilots to use gang warfare to take and hold space has always led to some incredibly fun evenings like the one I enjoyed last night.  For all of its bugs and imperfections that still need ironing out in subsequent Inferno releases (such as Dramiels and cynabals counting as Tech 1 ships), the system works.  But only if you care enough to use it in the first place.  This has been a major issue for years:  the purely cosmetic nature of occupancy plexing meant that pilots like myself abstained from participating because whether my enemy occupied my home system or not was irrelevant.  Faction Warfare was just a big war dec, and some boring missions I farmed to pay the bills.   All of this changes in less than two weeks.

When the Faction Warfare community first began to see the final list of mechanics slated for the Inferno expansion, many were outraged.   The denial of docking rights to enemy pilots is frightening to those of us who are used to being able to load up a system we want to capture with resources, and then reship as often as possible during the plexing battle in order to win the battle of attrition and come out on top.  As a CSM member, I had opposed the docking rights change from the beginning, citing it as one of the most common reasons pilots live in low sec as supposed to 0.0.  I opposed the extreme scaling of the LP store prices, because I felt it offered little comfort or hope to the faction that had fallen behind.  There is little satisfaction to be gained in seeing an enemy so demoralized by these consequences that they quit Faction Warfare entirely, which is precisely what many individuals on the “losing” side of the war have threatened to do in the past week.  Just as I said during my campaign for CSM, I have little interest in some scorched-earth “total victory”.  If I was, I’d move to 0.0.  I’m just in Faction Warfare for the fights.

Many members of the Amarr and Caldari militias in particular have set their sights on me as the responsible party for the items they’re unhappy with in the Inferno expansion.  They see the CSM member they voted for playing for the winning team, changing the rules on the fly to favor his own faction.  Disregarding everything I’ve ever said on the topic since before I even campaigned for CSM, all they know is the future presents some major obstacles for mounting a comeback, and that they never should have trusted an enemy to represent them.   I’ve abandoned neutrality, they claim.  The great irony in all of this is that despite consistently claiming that the Inferno changes ruin casual PvP and force 0.0 gameplay down our throats, my detractors are actually transforming the community's culture, injecting every drop of the hate-fueled bloodlust that we’ve come to expect from null sec Sovereignty warfare.  Distrust breeds hatred, hatred fuels war, and war brings fights.  CCP’s expansion is already working as intended.

The fact remains that the bulk of the Faction Warfare changes headed our way in Inferno are community-driven.  The crown jewel of the package: generous rewards that enable sustainable PvP and territorial warfare without an NPC grind, is what Faction Warfare pilots have been demanding for years.   We got it.  We asked for consequence and meaning, a reason to fight beyond a system’s name.  We got it.  We asked for a reason for new players to join Faction Warfare, we got it.   Even the most controversial part of the package: the docking restriction I opposed, was originally a community suggestion.  We’re a fickle bunch, often forgetting what we’ve asked for in the past.  The single feature that FW pilots are regretting the most that didn’t make it into Inferno?  Cyno-jammers, a blatantly 0.0-style mechanic.  The irony is still lost on those complaining about the "direction" this is all headed.  Lack of consistency in feedback, combined with the emergent nature of EVE’s gameplay, means that CCP’s developers have little to latch onto as far as a “perfect” set of Factional Warfare mechanics, ones we can all agree will drive small-gang warfare more than ever before.  I didn’t like station lockout, but I don’t know for a fact it will destroy the feature.  Neither do any of you. 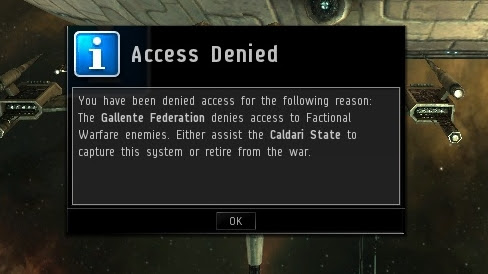 This is my message to those in the community that are outraged right now: you can blame me if it helps you get through this.  If you want to accuse me of having "won the meta-game", sucking up for votes from all four factions only to turn around and endorse mechanics designed to crush my enemies, go right ahead.  Believe whatever you want, it doesn't make it the truth.    All I care about is that you do something useful with that hatred.   Forum foot-stomping is pointless – CCP is at the end of their time to tweak the package, and we now know what we are up against.  There will be time to make adjustments later.  Right now, we need to make the most of it.  Take pride in your faction and come up with a plan to win this new war.   The defeatist attitude amongst a handful of players on the forums is not representative of the community that elected me to office.  I was elected by players that care more about the number of good fights to be had than about living in comfort.

As I said before, the bulk of my personal fleet is currently in Kourmonen.  My corporation’s home is the Huvilma constellation – Bosboger, Gulmorogod, and Lulm.  My alliance keeps its assets in Huola.   If you’re outraged, than come at me bro.  We'll work out our differences on the battlefield.  My responsibility as a CSM member is to see that Faction Warfare community enjoys the greatest war it’s ever seen in the years ahead.   It’s my job to make sure we all give a damn about logging in and playing the game.  So by all means, tell your corpmates I'm a horrible person, and call them to arms.  Come out and punish me for my “betrayal”.  Make me regret my supposed “capitulation” to CCP’s awful plan to ruin your game.  Just don't dishonor yourself and your friends by saying its going to be too hard. Work together if you must - the new mechanics allow allied factions to be rewarded for assisting you in burning down my ships, invading my territory, and exiling me from my home.

I’ll be waiting for you.

Posted by Hans Jagerblitzen at 5:43 PM

If you only have 6 minutes to make up your mind.....
Complete platform document
See who else is supporting Hans Jagerblitzen and hear what they have to say.
Missed an interview or debate? Catch up on my media appearances here.